D. H. Melhem, Ph.D., is the author of eight books of poetry, including Art and Politics: Politics and Art (Syracuse U. Press, 2010), New York Poems (Syracuse U. Press, 2005), Conversation with a Stonemason (IKON, 2003), a chapbook sequence, Poems for You (P&Q Press, 2000). Of Country (CCC, 1998), a book-length poem sequence about the United States, early pieces led the late Barbara A. Holland to state, “D. H. Melhem is the queen of topical poetry . . . the organ voice of the United States.” Of Rest in Love (rpt. Confrontation Press, 1995), an internationally acclaimed elegy for her mother, Cynthia Ozick observes, “It is permanent. It will remain until the stars burn out and the planet goes dark.”

Born in Brooklyn, New York, to Lebanese immigrants (with paternal Greek ancestry), she is a lifelong resident of New York City, where her two children were born and raised. Melhem has also published a trilogy of novels under the title Patrimonies. The trilogy begins with Blight (Riverrun, 1995, distributed by Syracuse University Press and recently optioned as a feature film) and it continues with Stigma & The Cave (Syracuse Univ. Press, 2007). Of her scholarly works, Gwendolyn Brooks: Poetry and the Heroic Voice (Univ. Press of Kentucky) was the first comprehensive study of the poet. Heroism in the New Black Poetry: Introductions and Interviews (also from UPK), concerns six leading Black poets.  A National Endowment for the Humanities Fellowship study, it later won an American Book Award. The book inspired poet Charles Guenther to call her “. . . a ‘superstar’ in understanding and interpreting modern Black American Poetry” (St. Louis Post-Dispatch).

She has also authored over 70 essays, edited two anthologies, and written Children of the House Afire, a musical drama she based on her poems about Manhattan’s West Side and produced in New York. Her Notes on 94th Street (1972; 1979) was the first poetry book in English by an Arab American woman and was proposed by Gwendolyn Brooks for a Pulitzer Prize.

A Board member of the Journal of the Research Group on Socialism and Democracy and a contributing editor to Home Planet News, a former Governing Board member of Pen & Brush, she serves as first vice president of the International Women’s Writing Guild. She was chosen to give a poetry workshop and reading at their first conference abroad in 2005 in Geneva, Switzerland. Melhem’s undergraduate work was completed at New York University, where she was graduated cum laude as a member of Phi Beta Kappa and Sigma Delta Omicron, the English honorary society. After a hiatus in her academic studies, during which she was married and raised two children, she earned a master’s degree in English at City College and a doctoral degree in English and American literature at the Graduate Center of the City University of New York. 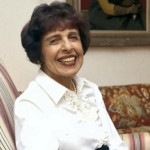