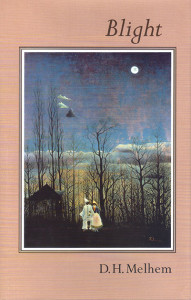 An amazing and original parable…enthralling and appalling, conceived in a poet’s crystalline prose and a humanist’s empathic courage.  D.H. Melhem’s powerfully imagined Blight may remind the astonished reader of Gulliver’s Lilliputians…but, even more, of a genesis incapable of the paradisal.  There is wisdom here — an indelible exemplum that will endure. 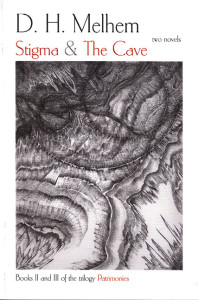 These two novels complete D. H. Melhem’s trilogy, Patrimonies, that began with Blight. Stigma, a dark political satire, and The Cave, a post-nuclear fantasy, confront the crucial issue facing this generation: what kind of world will be our legacy? Unsettling and sometimes terrifying, both novels center on ideological paradoxes created by a military-industrial government pitted against American individualist politics.

Stigma offers a vision of civil unrest, unemployment, and a chronic state of war. Books are recycled as toilet paper. Families are conscripted by lottery for the honor of war-work. Selected adults serve in a bizarre bomb factory. Youths are inducted into military service, children relegated to orphanages. Scathing yet awash in dark humor, Stigma relates one family’s struggle to survive in and escape a system of perversity and horror.

The Cave describes a motley group of people who flee to an abandoned cave, seeking shelter from a nuclear attack. Inside, viciousness, cowardice, and heroic gestures ironically transform their lives into a war. Tensions between family relations and newly formed alliances, communal needs and individual desires, religious beliefs and stark reality move toward a cataclysmic finale, in which one man retrieves a sign of faith.

Sparely poetic, simple in tone but rich in allusion, Melhem’s writing in The Cave, as in Stigma and in Blight, beckons readers to lift themselves out of their own lived reality, to look at the strange and threatening clouds on the not-so-distant horizon. 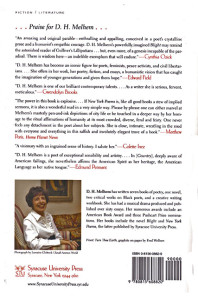 STIGMA – THE CAVE back cover

Buy the book online at Amazon: Stigma & The Cave (Patrimonies)
Buy the book at: Barnes and Noble | Syracuse Univ Press