Children of the House Afire

This gritty, urban musical, based on D. H. Melhem’s book of poetry Children of the House Afire, ran at Theater for the New City in New York, March 11-28, 1999. It played to enthusiastic, capacity and standing-room-only audiences.

Passion, greed, and revenge ignite the tragic dimensions of this West Side Story. Personal conflicts torment the main characters: young, Black, beautiful SUGAR, who thinks she loves Howard Buck, the white Landlord of her seedy tenement; HOWARD, who, like SUGAR, is reluctant to recognize the end of their affair; MILLIE, his unhappy, middle-aged wife, with whom he lives nearby on West End Avenue; JET, SUGAR’s younger brother, who despises her relationship with HOWARD and tries to rescue her from their poverty by attempting a bank robbery; JOE, SUGAR’s former lover, Black, a union organizer and political activist, who wants her back. After a two-year absence, JOE returns at the moment of JET’s crucial decision and subsequent action. Conflicts transpire within the framework of the neighborhood’s rampant gentrification, epitomized by the life and death of SUGAR’s building.
Note–this is a partial synopsis only 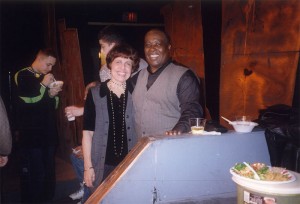 If unable to play Event Video, you can also access direct on Google Drive via this link: